The #FierceMadness drug name champion is Evenity. The Amgen osteoporosis drug triumphed over BeiGene’s Brukinsa in a 2,811 to 1,692 match to win the title of best drug name, as chosen by FiercePharma voters. 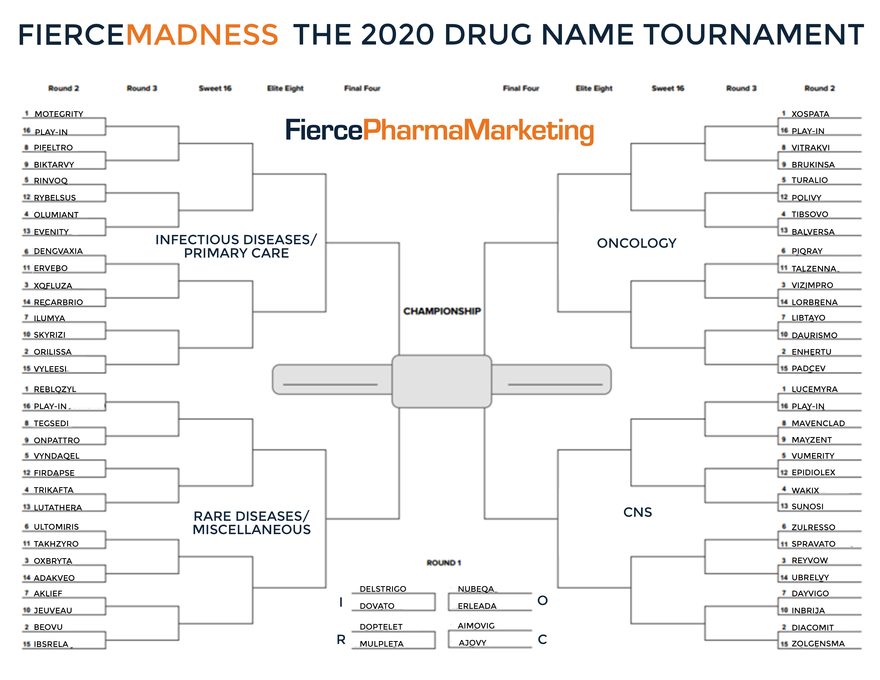 A burst of early voting spurred a back-and-forth contest in the first two days of action, but by the final contest day on Friday, Evenity had clearly pulled away.

However, there was one company that was rooting for both names. Brand naming and identity agency Brand Institute couldn’t pick just one because it was involved in both names’ development. Brukinsa was a full project for the agency, from its initial name creation to its logo and packaging, while Evenity was a marketing research project in which Brand Institute determined the appropriateness of the more than 10 names Amgen was considering.

Brand Institute’s Scott Piergrossi, president of operations and communications, and Hermann Spicker, divisional president for the eastern U.S. and Canada, broke down the finalist names for FiercePharma on Friday before voting ended.

Brukinsa, as a cancer drug with a target audience of oncologists, has a name that is “scientifically supportive of the mechanism of action” and “has a nice strength to it and a good cadence,” Piergrossi said.

Evenity, on the other hand—as an osteoporosis treatment with a more consumer- or patient-targeted audience—has “a benefit inferred in the name with even-ness or bone-evenness that one might extrapolate," he said, although he was quick to note he was not saying that was the exact rationale behind the name. Evenity also has "an appeal that works more with a female demographic and one for that specific indication," Piergrossi added.

Brand Institute is in involved in the creation or development of 75% of the drug names approved globally, but it's an increasingly difficult task. Not only are thousands of names, both generic and branded, already taken, but regulators have become more and more conservative about the messaging in a name, with no promotions or claims allowed or even inferred.

In the #FierceMadness contest that ran from Wednesday through late Friday evening, Evenity won in spite of not having any of those popular consonants that helped propel its peers—or maybe because of it? Many voters mentioned the easy, fluid pronunciation of "Evenity," and as one said, the name is “just so refreshing without an 'x 'or a 'z' or a 'q.'”

Almost 1,100 voters left comments in the hotly contested race, with both sides sure that their preferred name was worthy of the title. Many leaned on the fact that both names offered associations with what the drug does or how it works.

“The name Brukinsa includes key portions of the term Bruton’s kinase, the target of the drug, making the name easy to remember and easy to associate with the mechanism of action,” one voter wrote.

On Team Evenity, however, others pointed to connections such as “Evenity ‘evens-out’ bone growth for post-menopausal osteoporosis. It's a name that evokes the function of the drug.”

In the end, the winning Evenity got lots of kudos from commenters for its “beautiful” and “serenity”-evoking name that connected with the female audience it treats.

“Finally, a nice, pleasing, feminine sounding name for this important drug for women! May this be the start of the drug industry keeping women in mind as they bring more women-centered therapies to the market!” wrote one voter.

Brand Institute’s Piergrossi explained the female connection that goes with the Evenity name.

“We don’t like to say that there are female names or female-sounding names, but certainly there is an approachability to the tonality of Evenity that might have a feminine or female appeal. That also speaks to the underlying message you’re trying to communicate. If you had ‘EvenAx,’ for example, you might get a more power efficacy when you might want to have something that infers more softness to it,” he said.

Thank you to all those who voted in the #FierceMadness tournament this year. While many in the drug industry are focused on and rallying around treatment and vaccine possibilities for COVID-19, we hope it provided some lighthearted distraction in a challenging time.